GitHub link for the lazy

Gameplay link for the lazy, not guaranteed work after March 31, 2013

As mentioned previously, I built an online multiplayer-only version of Spacewar! using Erlang for all of the game logic and Cowboy for websocket communication with clients. The only client at present is a very simple HTML canvas one, here is a direct link. 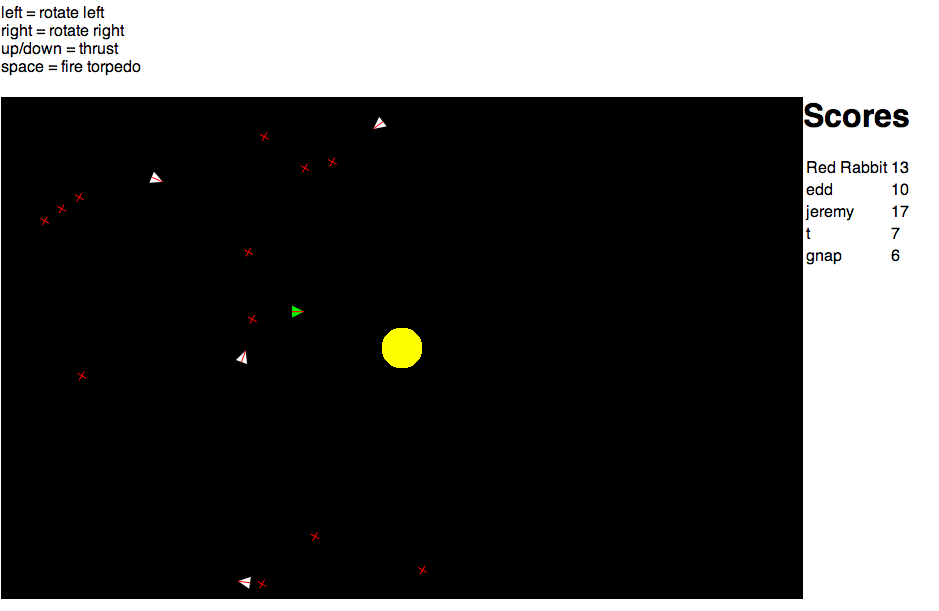 I wanted to validate a couple of choices for building simple things requiring:

Aside from my (so-far) abortive attempt to build a URL-shortener, I haven’t found an excuse to really dig into Erlang yet. At the same time, I have been thinking for a while about the possibility of simple games via websockets. The concurrency and responsiveness requirements for something like this make Erlang a natural choice.

They’re still sort of stuck in standards-hell and probably not as good as they could be but I wanted to try them out in more depth. I didn’t consider comet for this because the nature of Spacewar requires a lot of small, rapid updates and I suspected (but cannot yet confirm) that the repeated connection setup overhead might negatively impact this.

In actual fact, my assumption/suspicion is extremely likely to be totally wrong for the scope of this project. It probably only makes a difference at an extremely high rate of messages (eSpacewar does a minimum of 20/second to each client) which I’m obviously not dealing with here.

This one’s easy. I just wanted to see if a tiny EC2 node could actually handle it. It mostly can but the t1.micro it’s hosted on now tends to stutter occassionally.

I could probably go on forever about this (but won’t here). A few specific points that I ended up really loving:

I didn’t actually make much use of supervision so can’t comment on that yet (but love it in the Akka/Scala world).

Who knew? Simple gameplay, easy to drop in and low requirements. I’ve seen some great 10 player moments of mayhem. Would have liked to see more but I think it would make playing almost impossible due to the number of torpedoes flying around.

What I Screwed Up

This is a non-exhaustive list, see code and comments for more but these are the big things I think I could have done better. Please feel free to hit me up with agreements/disagreements and suggestions on Twitter or in the comments.

There aren’t any. I pretty much just slammed through this project to get things working and learn what I could.

Collision detection occurs after an entity (torpedo, player) has been moved and is based on points in space. This means that if players and/or torpedoes are moving quickly, they can appear to pass through each other. This could be solved by using line segments to see if paths cross.

A further issue is that the server side has no concept of the ship’s shape. It considers a ship to be a point with a certain bounding area and only registers a collision if two entities overlap.

My gen_server and gen_fsm implementations (see space.erl and player.erl respectively for examples) could possibly be simplified a bit by using handle_info over handle_cast or specific states in some cases. More importantly, this may have made the move from basic processes to gen_server and gen_fsm a little easier.

I would most definitely welcome opinions for and/or against the above, I clearly still have a lot to learn.

I ended up not using records (just haven’t looked closely at them yet) and used tuples everywhere. I suspect I may have been able to simplify some state by using these but am unsure of how this would impact some of my pattern matching use. I’m aware they’re an extension of tuples but don’t know if this enforces a certain structure. An area for futher exploration.

I’m clearly not an experienced JavaScript developer and need improvement (the playing space size is hard-coded, bad). One of the areas I wanted to get into but didn’t is WebGL but I’ll leave that for later.

I put this into a repo at a fairly early state so you will be able to dig back and see the progression (it was much uglier before).

As a result of this project, I’m confident enough with Erlang (and Cowboy) to start applying it to some more advanced/involved things so I’m going to push on with some new projects. I’ll undoubtably be posting progress on those at some time soon.

The problems above, unfortunately, likely won’t get fixed. I’ve essentially learned what I set out to and eSpacewar has served well for that process. Feel free to fork/host/modify, I’d appreciate a link to this blog if you decide to host it (or some derivative) somewhere else.

Comments/criticism most welcome on Twitter and in the comments below. I’ll consider pull requests on GitHub but don’t really want to mess with this too much further (feel free to fork and fix/extend).